Post #189
On Wednesday evening of February 8th, I got to see one of the greatest vocalists from the late 80's metal scene at the Cubby Bear in Chicago: Sebastian Bach, former lead singer of Skid Row. I have seen him in concert a couple times before (both shows reviewed previously on this blog), but this was the first time I got to see him as a headliner at a smaller venue. Touring in support of his newest album, Kicking and Screaming, I was pumped for a great evening of rackin' heavy metal!

Upon arrival I made my way to merch booth, checking to see if they were selling his new CD on-site. Indeed they were, and I asked the vendor if by chance Sebastian would be doing a meet-n-greet and signing after the show. Though they made no guarantees, they said it was a possibility. I kept this in mind, and browsed more of the merchandise. They also had music and shirts available from the opening band, a Chicago-area local band: Hessler. Always wanting to be on the cutting edge of the newest up-and-coming bands on the local scene, I signed up for their mailing list. I made my way back to the stage-area, making a mental note to come back for a CD between the opener and Bach.

I mingled with the crowd during the sound check and conversed a bit with a couple people I had met while waiting in line. Around 8:20 the lights went down, and we were about to get a dose of Hessler's style of rock n' roll...

When they hit the stage, I instantly saw why they would make a perfect opener for the likes of Sebastian Bach. These guys (and gal) were glam-metal enthusiasts to the core. Leather-clad, long-haired (slightly teased in some cases), and eye-liner make-up were a few of the visual elements they employed. More confirmation of their musical influence was aparent in their musical style: screaming guitar solos, melodic-heavy riffs infused with catchy hooks, and their singer, Lariyah Daniels, delivered the high-pitched, melodic scream that was the trademark vocal style from bands like Guns N' Roses, Dangerous Toys, or even Skid Row! Guitarist Igz Kincaid provided harmony backing vocals on several tracks, and intermittent lead vocals here and there as well.

Hessler were getting the crowd worked up for Sebastian Bach in stellar fashion. A few tracks before they closed their set, they even unleashed a cover of Kiss' 'I Was Made for Lovin You' (Igz sang lead vocals on this one). During another song at the end of their set, they employed some synchronized headbanging as part of their stage choreography... awesome!

Once they finished their set, I took a few minutes to stretch my legs a bit. I also made my way to the merch booth and snagged my copy of Kicking and Screaming (Crossing my fingers I have a chance to get it signed after the show.)

Sebastian and his band hit us with many Skid Row classics in between selections from both the new Kicking and Screaming album, and some from his Angel Down release a few years ago. One of my favorite new songs he performed is 'TunnelVision'; it had a melodic intro, solid groove, and catchy chorus. It was co-written by John 5 from Rob Zombie's band. From the 'oldies but goodies', I think my favorite moment was when they played 'Big Guns', the first track off the first Skid Row album. That was the first time I'd heard that song performed live.

Never mind that Sebastian had to stop the show 2 more times to have security kick out people from the audience who has started fighting, this was still an awesome show! But the best part was yet to come... Right before the last song, he announced that he'd stay after the show for a meet-n-greet with anyone who wanted to stick around, and sign souvenirs as well! 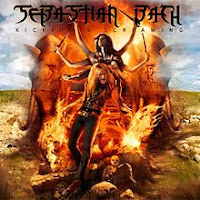 I took advantage of this opportunity, and hung around until the wee hours of the morning to get his autograph, and say a brief word or two to him. It was really cool of him, and his band were patient and friendly too. His new guitarist, Nick Sterling, was pointed out by Bach as having recorded his first album when he was 10 years old. Joking with the audience, he said that it was recorded 2 weeks ago (he did almost look like a kid on stage next to Sebastian Bach), but he was a great guitarist, and presented the classic Skid Row stuff as flawlessly as the new material. For what it's worth, I think Kicking and Screaming is the best album Bach has done since Skid Row's Slave to the Grind! 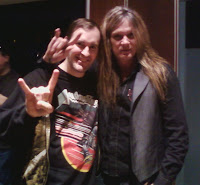 Setlist HESSLER:
-Kamikazi
-Windy City Wild Child
-C'mon
-Who Will You Run To
-Rising Sign
-Last Alive
-Gone Away
-Shark Attack
-I Was Made for Loving You (KISS cover)
-I Live On
-Hellion (W.A.S.P. cover)
-Crash 'n Burn

Setlist SEBASTIAN BACH:
-Slave To The Grind
-Kicking and Screaming
-Dirty Power
-Here I Am
-Big Guns
-(Love is) A Bitchslap
-Stuck Inside
-Piece of Me
-18 and Life
-American Metalhead
-Monkey Business
-As Long as I Got the Music
-I'm Alive
-I Remember You
-Tunnelvision
-Youth Gone Wild
Posted by headbanger_71369 at 12:06 AM