Act of Destruction are a thrash metal band from Chicago. They write aggressive songs with fast tempos, raw production, harsh vocals, intense guitar solos, and lyrics infused with political and religious criticism. Having recently won my Independent Band of the Year poll for 2017, here is my promised review of their 2015 release Extinction. 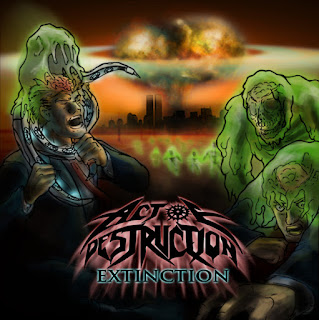 Extinction is a well-crafted, full-length debut album, with 12 tracks counting the instrumental intro. While they are firmly fixed in the aggressive side of thrash (they don't have any softer tracks that break from the aggressive pattern on this release), they do keep things interesting with top-notch lead guitars and plenty of solos. Extinction may not be a concept album, but it is a true listening experience.

Overture of Destruction is the instrumental track that serves as an intro to the album. It starts with thundering riffs that tease with bursts of power that are allowed to ring into one lull after another. Then they hit you between the eyes with Worldwide Hate- a furiously fast thrasher! "Now the fury is unleashed, Law and Order are deceased." the lyrics intone, and the atmosphere of chaos is set. Then, ascending guitar solos shred and the song's tone shifts to a breakdown. The intensity returns to close out the number, and you know you'll be banging your head.

That mood of chaos, darkness, and aggression holds throughout the album from one song to the next. While the riffs are constantly heavy and aggressive, there is always a lead guitar in the mix, often shredding intense leads. The soloing is frequent and extensive when it comes around. The lead guitars serve to maintain an element of  melody within songs. Often there are long stretches of guitar solos that bring new dimensions to the speed metal riffs.

The guitar tones remind me of Sepultura's early works, while the vocals seem to be comparable to Exodus. In both those comparisons the aggressive and relentless tempo also is an accurate benchmark. Lyrical themes range from political criticism to occult imagery. Though the vocal delivery may be one dimensional with the constant gritty screams, the lyrics still provide insightful debates on the subjects they choose to explore.

Overall, Extinction is a successful thrash metal effort. It harkens back to the early days of thrash, when it was truly synonymous with the term 'Speed Metal'. Aside from their obvious talent at maintaining lightning fast tempos, their is no talent lost in the area of lead guitars with this band.

Don't forget to stream or download Extinction through Act of Destruction's Bandcamp page!

Recommended tracks:
-Worldwide Hate
-Death Warriors
-Disciples of the Night
-Black Reality
-Corpses of the Dead (This one contains one of my favorite lines: 'The road to hell has become far too long'!)

Let's get that sophomore effort so we can all GET DESTROYED!