While initially I was not pleased to have to use a different format to conduct my most recent poll for Independent Band of the Year, I did discover that the Google Form approach allowed me to customize the poll a little further. For those of you who voted, you probably noticed that I added an extra question this year, asking you to check the songs you previewed prior to casting your vote. That is, after all, the goal of this contest: to get more people to actually hear the music from these unsigned bands that deserve to be heard. I was very curious to see how many respondents actually were listening to the songs. 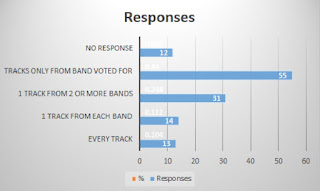 There were 125 total responses to this year's Independent Band of the Year poll. Nearly half of those responding (44%) previewed only tracks by the band they voted for. This was expected to a certain degree- I did encourage all contestants to share the contest among their fans and campaign for votes in any way they saw fit. I was encouraged to see that so many respondents took the time to listen to at least one other band, and a fair amount of respondents (almost 22%, more than 1 in 5) listened to at least 1 track from every contestant, if not every single recommended track. (each band except Mediums had 2 tracks featured in the contest.)

Here is a graph depicting how many plays each song received: 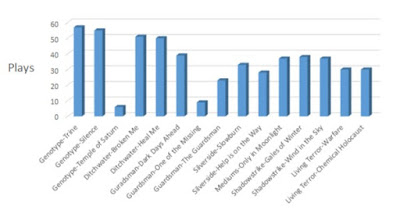 (Note: The bands Genotype and Guardsman requested one of their tracks to be changed after the contest was already underway. Hence you see 3 tracks for those bands, but they only had 2 tracks recommended at any given time.)

Clearly the top 2 vote-getting bands, Genotype and Ditchwater, received slightly more song-plays. However, I was quite pleased to see that every band received a good balance of song-plays.

I look forward to trying this approach again next year. Whether it will again be through Google Forms or some other format I can't say for sure.

Thank you to all who voted for any band in this year's contest. Watch this blog for a review of Genotype's album Genotype III coming very soon!

Posted by joelabeverley at 9:47 PM