On Saturday, April 20th, 2019, Penny Road Pub in Barrington, IL hosted a festival of rock and metal music known as Midwest Springfest. Starting mid-afternoon and running non-stop all through the afternoon and evening, no less than 14 bands got their turn to inundate our auditory senses and show off their variety of talent.

I unfortunately arrived too late to catch Mary Vaughn, Mudfish, and 20 Spot. I did arrive just in time to catch most of The Kringe's set, and then saw every band after that. The venue utilized both the main floor and basement stages, and set times were scheduled so that roughly as one band finished up their set, the next band was about to go on. So it was relatively easy to see every band. 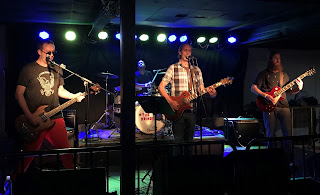 The Kringe were a hard rock band- not aggressive enough to be called metal, but this fest was a broad spectrum 'rock' format, so it was a bit of 'anything goes'. The Kringe were an old-school rock band, and if I had to name their genre then and there I'd say they were 'sleazy blues-rock'. I could detect some influence from the likes of Ted Nugent, Lynyrd Skynyrd, and Zeppelin. 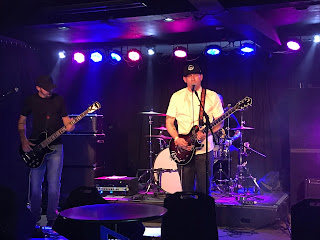 Then it was upstairs to catch Greywall. Greywall were a hardcore, alt-rock band. Their vocals were harsh screams offset by scratchy melodic singing. They could be compared to Seether or Three Days Grace. Blend that with Nine Inch Nails and you may not be far off. They definitely had a gritty and raw sound. I was about to be lulled into their ambient dark mood when they hit overdrive and the guitars screamed heavy and distorted along with the vocals. The headbanging was quite enjoyable, and I knew this fest was going to have much variety in store. 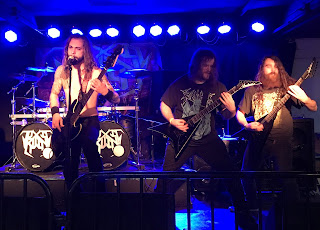 Toxic Ruin from Sheboygan, WI brought the intensity up a few notches. These guys are old-school thrash, and good at it! Fast and complex riffs, technical drumming and raspy growled vocals. They had the crazies headbanging in an instant and didn’t let up for their whole set. They even included a cover of 'Crystal Mountain' from Death’s iconic Symbolic album. My neck now thoroughly loosened up, I headed back upstairs to catch the next act. 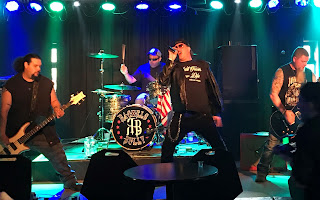 Back up to the main floor and Rachel’s Bulky were set to go on. These guys were more old-school rock n roll. They were so intense the shorted out a part of the sound system on their 2nd song. After a short delay to repair the sound system, they were back at it, rocking out to the core. A few more songs into their set they switched it up with a ballad, but then returned to their comfort zone of hard rock with a sleazy edge. I'd recommend them to fans of Buckcherry or Black Rebel Motorcycle Club. 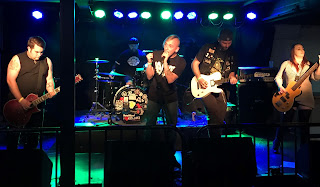 Prison city brigade, from Joliet, brought something new again, showing us a taste of hardcore punk! They had some crowd participation in their name sake song, as they had us chanting “We are! We are the brigade!!” The guitarist came into the audience and jammed one of their songs right there among the crowd. This band gave it their all and poured their hearts (and sweat) out on the stage. 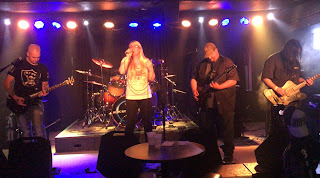 Blacken the Day were fortunate to be able to play, as one of their guitarist was just released from the hospital the day before. They didn’t disappoint. Self-described ‘Jazz-metal’, they are the product of a jazz singer who joined a metal band, so both influences were apparent in their sound. Their riffs were heavy with an alt-metal vibe, their singer's vocals melodic and clean. This brought a nice contrast to their sound and delivery 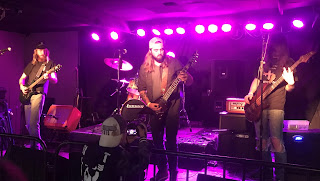 Monroe's sound was a welcomed mix of hard rock and alternative metal. They delivered a heavy, rocking set while keeping the crowd engaged. Their bassist was sporting a Genotype t-shirt, a hint that they also were representing the Rockford scene. Track for track, Monroe delivered a loud rocking performance and songs with catchy grooves. 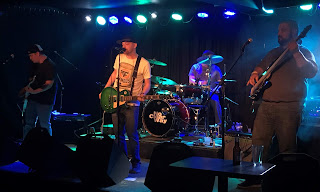 This band again brought something new to the mix. Heavy guitars, and a deep toned-bass groove set the foundation for their singer's post-grunge inspired vocal style. There was evident of the influences of Scott Weiland, Eddie Vedder and the like, but backed by a more metal style. Theirs was another engaging performance with more bands yet to come! 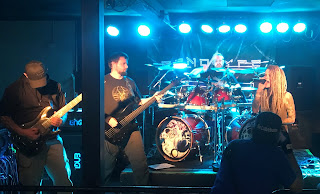 With only a few bands left to perform, it was finally time to catch Genotype, the winner of my independent band poll last fall, in concert! I first reviewed them after they played Dame Nation back in 2013. Since then I had followed their social media, but never had another chance to see them live. Once they started playing it was obvious they were worth the wait! They opened with 'The Dream' from their latest album- Genotype III, and their intensity was at 11! They play a style of metalcore, mixed with electronic elements. Vocalist Kadie Kirby delivers both melodic and screamed vocal styles, with equal mastery of each style. Charles Esposito and Shaun Combee keep assaulting the audience with heavy riffs and killer solos. All the while drummer Remington Roberts keeps an intensely tight beat with rapid blast-beat drumming. I was especially blown away by the vocal range displayed in their track 'Drifting to the End'. They are an amazing band to see live. I'd try to catch their next show if I were you!
-The Dream
-Temple of Saturn
-Lysithia
-Energon
-Drifting to the End
-Silence 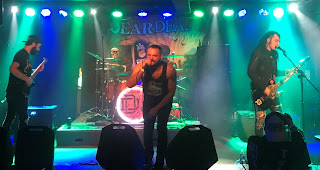 The Penultimate band was Dear Deadly, and they performed a more traditional style of metal. Sharp guitar tones, frequent solos and a scratchy but clean vocal style had me pegging them as power metal. Their vocal style was clean singing, but with a power and edge that it hovered at the bring of a scream for the majority of their set. For a comparison I might look to the early works of Bullet for My Valentine, or In Flames. Their songs had great hooks! At one point I thought I heard a guitar solo that mirrored the melody of  'La Vida Loca'. Check out their song 'Deviant' and see if you hear the same! 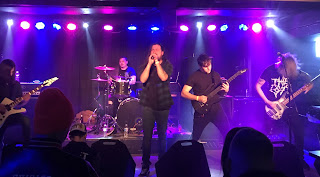 By this point of the show there had been so many great performances that I found it hard to believe the show organizers could have possibly saved the best for last, but then Alethia took the stage, and I was soon proven wrong. Alethia were a true metalcore band. Fast, technical, complex riffs, and a hardcore screamed vocal style, they pushed the adrenaline through the roof! Still, more than just the intense and heavy sound, they incorporated segments of melodic phrases and clean backing vocals the give their sound a sophisticated and professional delivery. I was banging my head as intensely as I had all night, and their musics power reminded me of the likes of Killswitch Engage, or August Burns Red.

At the end of this truly rewarding metal music fest I had definitely added many bands to my list for must-hear music. I have downloaded, or bought their CDs online, and highly recommend you do the same! Check your iTunes, Spotify, Bandcamp, Reverbnation, facebook, and Youtube for these bands, their catalog of albums or EPs, their most highly played songs, add them to your own playlists and spread the word to your own metalhead friends!

Thanks you for reading, and as always, Happy Headbanging!
Posted by HappyHeadbanger at 1:42 AM