Act Of Destruction have returned with their 2nd independent release, Beyond Eternity. Roughly 4 years have passed since their debut Extinction, which I reviewed previously. In that time the band has seen some changes. One change was the addition of David Kraus on guitars and backing vocals. Kraus is also guitarist and lead vocalist from Scars of Armageddon (another former winner of my Independent Band of the Year poll), so if you're familiar with their sound, then the backing vocals should sound familiar! 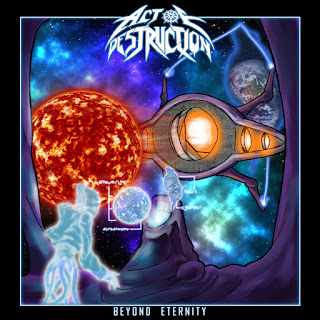 Beyond Eternity starts off with Eternal Combustion. This song is sure to be a crowd pleaser to their established following. It has their classic formula of rapid-fire drumming, melodic-death/hardcore vocals by John Bravo III, intricate guitar riffs and unarguable talent with guitar soling. The production seems even crisper than their debut, which was already great! It's like a perfect hybrid between metalcore and melodic death metal.

Ascending Into Glory has an initial guitar riff that fades in. They slow the tempo down slightly, but otherwise is another great song, complete with a great guitar solo. This one seems to have some power metal influences outside of the vocals.

Spiritual Infinity is where Act of Destruction up the ante, and give us all a new twist to their formula. When the chorus comes around, Kraus' soaring melodic vocals blend in with John Bravo's harsher, death-metal growls. The resulting sound surprised me at first with its contrast in style, but it works! It will simultaneously quench your rage and pierce your eardrums. There is again fantastic riff work, and substantial guitar soloing- a true winner of a song!


The Source is a different combination again. With another display of slower-tempo riffs, Act of Destruction showcase their whole package here. The vocals are primarily John Bravo's hardcore growls, but the backing vocal formula includes both Kraus' melodic screams and Nigel Bravo's deeper, guttural death metal vocals are present as well. Then, we also get some spoken word passages by Nigel. The lyrics throughout this EP have been orbiting themes of philosophy, conservation and more esoteric concepts like religion and science fiction. This song is again like that, and has one of my favorite lyrics: "Your tears are the rain upon the blinding dust of the Earth."

Starkblast is a crowning jewel on this recording effort. Clocking in at over 7 minutes, it is the band's longest recording yet. It brings progressive metal elements into the fold more than they've done before. Again the vocal style is a 3-fold revolving door with the Bravo brothers providing the hardcore and death-metal growls, and Kraus the melodic elements. They also have guest vocals by Pindy of Armored Assault! Closing it off are more esoteric spoken word passages by Nigel Bravo, backed my Kraus' fading melodic screams.

Visit Act of Destruction's Bandcamp page for downloads, or find them in iTunes or on Spotify!
Posted by joelabeverley at 9:09 PM