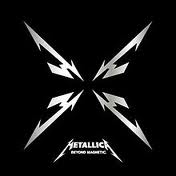 I first listened to this EP after finding it in my library's audio-visual collection. I'm so glad I checked it out... I didn't know what I was missing! In a similar vein as they did on Death Magnetic, Metallica deliver more of their classic formula of contrasting heavy thrash riffs with clean, minor-key melodic passages. Don't let the fact that it's only 4 tracks fool you, though. This EP is still a good half-hour's worth of classic thrash metal. Every song is at least 7 minutes long! Let me break them down for you...

Hate Train- This song is a straight forward thrasher for the verses, and changes things up with melodic bridges featuring some clean guitars (no real chorus). Metallica get creative with some riff progressions towards the end of the song. One of the main riffs of this song strongly reminds me of the primary riff from 'Fuel'.

Just a Bullet Away- A chugging, mid-tempo, heavy song... until the clean breakdown segment emerges at about the 5 minute mark. From there it builds back up again, eventually returning to the original heavy riff.

Hell and Back- Starts off with a clean and haunting intro. Moves on to a faster, heavy riff that is reminiscent of 'Broken, Beat and Scarred'. I wonder if this similarity is perhaps the reason if was left off of Death Magnetic? Throughout this song the band goes back and forth between these clean and heavy elements. Oh, and some great guitar soloing from Kirk Hammett can be heard here also!

Rebel of Babylon- Another song with a clean intro... soon to be subjugated by another thrashy, heavy riff. At this point, it becomes the most intense song on this EP. When the chorus hits you, you get a very catchy hook that satisfies the fans from the 'Black Album' era. The lyrics are full of religious symbolism, as James Hetfield sings about the Stigmata, the crucifixion and redemption. However, this song would not be complete without another killer guitar solo from Kirk. This is my favorite track on this EP. I seriously wonder why it didn't make the Death Magnetic cut. It would have made an already great album even better!
Posted by headbanger_71369 at 11:08 PM

Labels: At Your Library, Metallica, Thrash